The Kingpins of Leasing 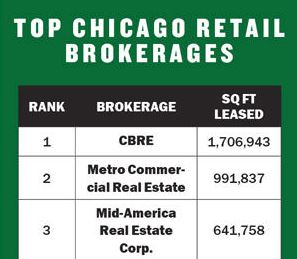 The Real Deal’s ranking of the top leasing deals and brokerages in major markets in the U.S. reveals that, despite efforts by national firms to boost their retail teams in recent years, the marketing of stores is still largely a local game outside of Los Angeles and New York City…

…To rank the top brokerages in leasing for Chicago, Miami, L.A. and New York, TRD examined data provided by commercial real estate services firm Lee & Associates NYC on new retail leases and renewals in those markets from April 2017 to March 2018. Brokerage leasing totals and deals were shared with the firms, which were given the option to submit additional information.

*Metro Commercial Real Estate has ranked #2 on the list with 991,837 square feet leased.